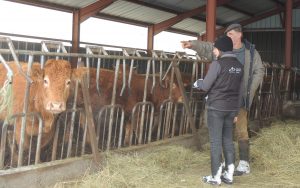 With the arrival of GDS international (GDSI), at the end of 2020, as the 18th member of the ENSV-FVI International Commission, the role of livestock farmers in international health policies will be strengthened in the projects of international cooperation conducted by ENSV-FVI.

Based on the model of the “Groupements de Défense Sanitaire” (GDS – Health Defense Groups), created in France in the 1950ies at the level of each department, then set up as an association under the impulsion of the State, which wished to implement an organisation capable of controlling zoonoses that were very present in livestock farming, the European scope of GDS France was deployed in the 1990ies and 2000ies to share this knowledge on a European Union scale and now on an international scale.

While the GDS have contributed to eradicating zoonoses, they have also extended their actions to the control of other unregulated diseases that are not contagious to humans, but have an economic impact on livestock farms.

Thus, beyond animal health issues (identification, epidemiological surveillance, etc.), GDSI will share its expertise on the health benefits, recognised by the OIE, drawn from their model for structuring livestock farmers and will promote the link between livestock farming, the economy of rural populations and food self-sufficiency in our cooperation projects.