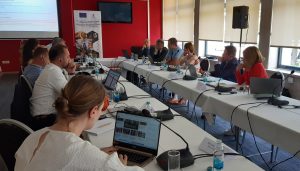 For the second time since this project started, the team in charge of implementing Animal Health twinning in Bosnia and Herzegovina (BiH) was able to meet on site. It was an opportunity for reunions, but also for intense work by the various stakeholders. This meeting made it possible to record the progress of the project, in particular on the Animal Health Law and the Veterinary Law, but also in terms of the production of documents related to animal welfare. With the support of the EUD, this steering committee also enabled open discussions with the beneficiaries, which will facilitate the continuation of the missions to be carried out for the accomplishment of this project.

The project »EU support to capacity building and gradual Union acquis alignment in the veterinary sector of Bosnia and Herzegovina » is funded by the European Union in the amount of 3 million EUR, and will last for four years (2020-2024). It is implemented by the consortium led by Austria, with their partners from France and Croatia. The Beneficiary Country administration is represented by the Veterinary Office of BIH in cooperation with competent authorities of the entities and Brcko District of BIH. It has three components: animal health, animal welfare and animal by-product management. It provides for the Union acquis alignment in these areas and capacity building.